Lal Bahadur Arts, Science & S.B.Solabanna Shetty Commerce College, is a premier Institution for higher studies located in Sagar a taluk head quarters in Shivamoga District. It is managed by Malnad Development Foundation of which Mr. K.H Srinivasa, a former minister of Karnataka is the President. Previously affiliated to the Mysore University and then the Kuvempu University, the college was accorded Autonomous status by the U.G.C. and the Government of Karnataka in the year 2006.

The college was established in the year 1964, with the foundation stone being laid by the then Prime Minister of India, Sri Lal Bahadur Shastri. The Malnad Development Foundation came into being in 1964 under the presidentship of Sri K G Odeyar, an ex-MP, with the objective of providing quality education to the people in and around Sagar at an affordable cost. Though a rural institution, the college has had a phenomenal record in helping the local community negotiate the challenges of the wider world, thanks mainly to the support system realized with the help of students, parents, and benefactors. At present the college is attracting students from outside Malnad areas and other districts as well. The college has started Post Graduate Courses in Commerce, Economics, and Mathematics to ensure that rural talent does not go waste for want of institutional support. The present strength of the college is about 1250 including P.G. students.

The college is located some 3 kms. away from the centre of Sagara town, on  NH 206 connecting Bangalore and Honnavara, and on a sprawling campus of more than 50 acres. Situated in serene, sylvan settings, with the Western Ghats providing a wonderful backdrop, it has a perfect teaching-and-learning ambience. The college has spacious class rooms, a well furnished library, a computer lab with internet facility, sports facilities, NSS and NCC wings. The regular formal academic programs are supplemented through co-curricular and extra-curricular activities conducted by associations like Kannada Sangha, English Study Circle and Film Club.

The academic achievements of our students since the inception of the college have made it one of the premier institutions in Shimoga District. When the college was affiliated to Mysore University and then Kuvempu University, getting ranks was a regular phenomenon. This, we believe, is in itself creditable considering the fact that the majority of students who have passed out have been rurally bred and for many, their first exposure outside their place of birth was through our institution. Even now the college comprises of a majority of such students. The teaching faculty of our college has many alumni of the college and many who have gone out from here have occupied responsible positions in important government and private organizations including the civil service. 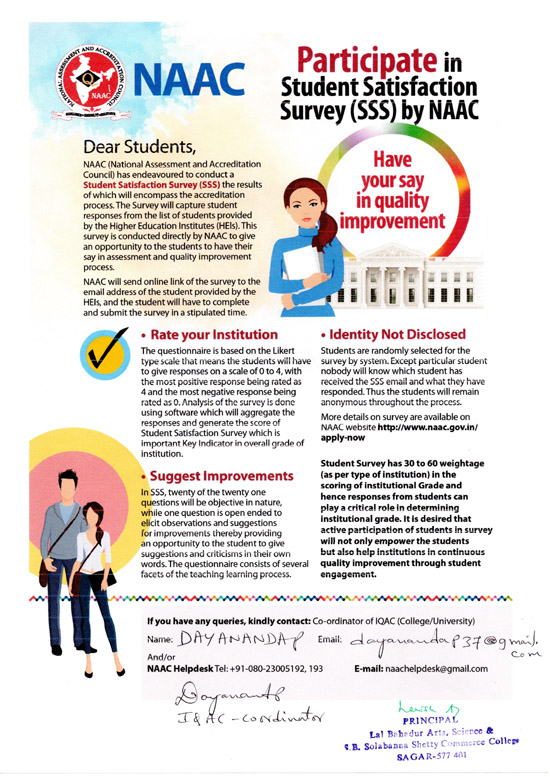